Yesterday I smashed my PB to pieces, finishing the race on a chip time of
3:44:15, more than 15 minutes faster than my previous personal best. Crossing the finish line on Sir Matt Busby Way, in front of Old Trafford, I was so shocked and pleased with my time that I didn't know if I wanted to laugh hysterically or bawl my eyes out.

But how was the actual race? The days before the race all weather reports promised rain and just a few degrees above freezing - oh joy.... I had the Finchley 20 in the back of my head when getting dressed in the morning and brought my GoreTex gloves to wear in case of pelting rain. I debated if I should wear long or short tights, settling for a pair of 3/4 length in the end, paired with a long sleeved and a short sleeved t- shirt - and the brilliant hat I got from my sister a while back. On my feet I had my new Adidas Boost shoes, hoping they'd make my 26.2 mile journey a little bit more pleasant.

The start of the race was near Old Trafford and so was my hotel so after a short walk in the cold but dry weather I arrived with plenty of time to spare and checked in my bag and kept only an old fleece jacket I thought I'd discard just before starting the race. To stay warm(ish..) I bought myself a cup of tea then headed for the loos. Bad bad idea, as the cup of tea had me dying for the loo from mile two and onwards....

With my predicted finishing time of 4 hours I was put in starting group B with all the mega fast runners and I felt a little bit lost standing there among all those speed demons and vowed that I'd stay with my own pace and not get sucked into running too fast in the beginning of the race. When the gun went off I was so cold my teeth were chattering and my hands and feet were pretty much numb, mainly because the wind was pretty grim.

The first few miles I had loads of people passing me but I stayed with a, for me, comfortable pace. My legs felt light and fresh and I thanks myself for resting Friday and Saturday. I started drinking and taking energy Shot Bloks early on as I'd been too nervous to stomach much breakfast and after an hour or so of running I struck up conversation with a guy that'd been running next to me for the last few kilometers. He'd done Brighton marathon just a few weeks before and wanted to try and improve his time a little bit as he'd gotten tired towards the end in Brighton. We kept a very good pace, but not a strenuous pace, and passed the 13 mile mark in roughly 1h56minutes, still feeling very comfortable. Shortly after the 13 mile mark there was a little hill and that's where I lost my companion when I powered up the hill like a boss.

At that point I'd realized that I would be finishing under 4 hours if I kept the pace but thought it'd be brilliant to finish in 3h55minutes so since my breathing felt completely unstrained I let the legs move on their own accord, feeling like a Duracell bunny. I'd gotten a bit stiff in my left leg/bum , which always happens when I run a long distance, but although it wasn't very pleasant I could power through the pain (thank you Coach Martin and Coach Mark for that!). With 15k left I still felt strong and got a big boost when I passed a group of men running up a little hill and heard an elderly lady shout 'That's girl power for you!'.

I'd already started passing a lot of people that had passed me earlier in the race, recognizing their vests, but I didn't know if it was because they'd gotten tired while I kept my pace or if it was because I'd increased my pace. The last five or so miles were not pleasant for my left leg muscles but it wasn't bad enough to slow me down. When I saw the 25 mile marking I turned up the speed a notch and despite my breathing getting a bit more labored my legs were just going like a Boeing, with not much effort. When I turned into the finish straight and saw the clock over the finishing line saying 3:45 I got so shocked I almost stopped but then I put on a proper sprint - it might have been the fastest I've ever run in my life, actually.

I was tired, walking to pick up my medal and finisher t-shirt but not as exhausted as I've been after my two previous marathons. Even today, the day after the race, I'm less sore than I was after the other races. I quickly called my dad, sent a few texts to the rest of the family and closests friends, the first one to Zoe who've been a massive support in my training for the race. After a walk back to the hotel, a quick shower and a trip into the city centre I met my friend Gem for celebratory drinks and a big meal. Still I woke up at 6am this morning, starving....but that's a cheap price to pay for smashing one's personal best to pieces!

The crowd support was pretty brilliant, especially in Altrincham, with lots of people cheering you on along the course. The water pouches they had for hydration was the best thing I've ever experienced in a race, along with the Shot Bloks and the isotonic fluids in little tetra boxes. It was a decent sized race but not too big and I was pleasantly surprised by the course - it took you through some lovely areas of Manchester. Starting and finishing at Old Trafford was pretty immense, even for someone who's not a Manchester United fan....not to mention being childishly pleased with running a negative split! 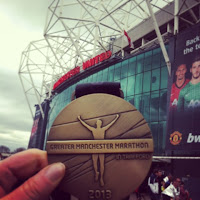 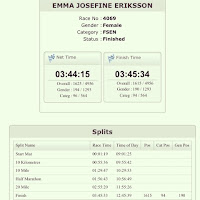 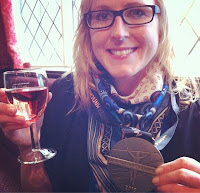