Don't Let It Take Over Your Life

Today I'm gonna rant a bit. I've been off work for a week and have plenty of time to catch up with my favourite fitness blogs and my exercising Facebook/Instragram/Twitter friends but it's all left me with a slightly sour taste in my mouth.

You see, I think way too many people are slightly obsessed. For some people their entire lives seem to revolve around training and food, and whilst I can understand having exercising as your hobby (hell, I have exercising as a hobby!), I think that people need to relax a little. People are training and eating/dieting like they were pro-athletes, their lives ruled by a rigorous training regime and a food diary thicker than the Oxford Dictionary - and you know what I find the most disturbing part of this whole malarky? I don't even know if they do it for themselves or if they do it to prove something. Way too many people seem to have a need to validate themselves and their training by always running longer, more races or more challenging races. I see, on blogs, Facebook, Instagram, Twitter, people with such one-dimensional lives that all that make them, well, them is lost. All you see is a person seeking validation through their achievements in Lycra.

I do not want to become that person, I'd even go as far as to say that it's my greatest fear in life to become that person. Do I like running? I'd say I bloody love running. And cycling. And bootcamp. And a few other things. BUT I also love having a glass of wine at the rooftop cinema, eating a piece of chocolate at work when it's one of those days and I love going out dancing and drinking with my friends. I'm excited about running the London Marathon and I relish the challenge of my upcoming ultramarathon - but running and racing isn't who I am. It's a part of who I am, and I don't want it to be all I am. As some people might know I lived with an eating disorder for the majority of a decade and if it tuaght me anything it is that a one-dimensional existance is soul destroying.

So, what I'm trying to say with this blog post is....Don't Let It Take Over Your Life. You are more than your accomplishments in Lycra.
Posted by Josefine at 14:34 No comments:

Knowing When Enough Is Enough

In ten Days time I'm meant to take on the Royal Parks Ultra and I'm scared witless. Logically I know I can do it but I still worry. Today I ran a little 13 mile run and I should really leave it be now. Do a fre short runs, some cross training and trust in the training I've already done. Yet I feel like I could fit in another long(isg) run on Sunday and will have to stop myself from heading out for a run. I hope I succeed..... 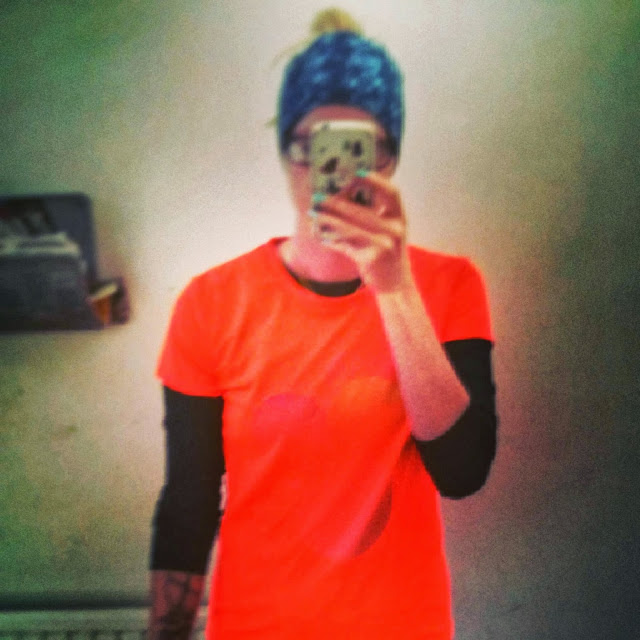 I'm in! I finally get to run the London Marathon, and I'm so excited that there no words for it.  Wooooo!

Posted by Josefine at 14:16 No comments:

Running Really Is Cheaper Than Therapy

You could say it's exhausting running a marathon. As someone who's run several marathons I can confirm it is, but I can also say that there is nothing as exhausting than those few moments when there's a collective intake of breath as everyone realises that depending on what happens in the next few moments someone might live or die. Those few moments fills you with more adrenaline that anything I've ever experienced and pretty much ages you 10 years. As some of you may know I'm a nurse by profession, and without saying anyhing confidential I can say that sometimes I encounter emergencies. Full blown, life or death, kind of emergencies that make you realise how fragile and previous life really is. Yesterday was one of those days and I ended up staing a full 18 hours at work so when I finally got to bed around 3.30am I was exhausted yet twitchy from adrenaline. Around 11am I woke up, feeling more hungover than after a night of drinking, to a grey and cold London. I had, before yesterday, planned to do thousand and one things today but when I woke up today there was only one thing I wanted to do. I wanted to run.

By the time I'd had breakfast and gotten dressed it had started to raining, and not a Little light drizzle either - no it was proper pelting down. A part of me wanted to climb back into bed and pull the duvet over my head but logically I knew that I needed to get outside and do some running therapy. After the initial few miles when the rain annoyed me slightly I was soaked and had started to enjoy it. For every step a little bit of my worries seemed to slip away, alongside the remaining adrenaline. If you asked me what I was thinking I wouldn't know, all I know is that it was more cleansing than any therpahy session. Life, death, love and happiness seemed to make more sense than after two hours than before so whilst I was soaked and frozen solid post-run I was also more content and calm.
Posted by Josefine at 20:06 1 comment:

Today I was meant to do the London Duathlon, but the last few days sore throat isn't budging and with only three weeks until my first ultra marathon I had to admit defeat. No duathlon and I'm absolutely gutted.

Over and out, people.

Two weeks. Two weeks is all I have until I make my duathlon debut. I feel ridiculously unprepared, having put all my focus on surviving a month with Barry's Bootcamp and then the Royal Parks Ultra Marathon. Instead of rigorous preparations I'm following the Nike approach...just do it!
Posted by Josefine at 07:54 No comments: