Yesterday I, together with my cousin Frida and my older sister Katarina, ran the half-marathon 'Jämtland på Fötter' in the  beautiful town Östersund. I didn't have very high hopes for the race, as I hadn't done much training for it nor had I had enough rest ahead of the race, I was just looking forward to get a chance to practice racing.

When we woke up on the morning of the race the weather was grim..... windy, rainy and cold, and those of you who know me also know that those conditions just aren't for me. We got to Östersund quite early (we live a two hour drive away), picked up our bibs and then we waited. Eventually it weas time to take the bus out to the start, as you started the race in a suburb and then ran into town, all the time along Storsjön. When the race started it was only a light drizzle coming down, but the winds had picked up slightly. The race started and right away we had quite a good pace. My cousin and sister had a lot of power in the legs, I didn't - I pretty much felt tired from the first step.

After a few miles we caught up with one of the pacers, the 1.45 pacer, and decided to stay with him. I struggled a bit as it was pretty undulating....east London is just too damn flat, but my sister and cousin they always run in hilly surroundings and they stayed strong. With four kilometers left you hit a big bridge and the wind up there was relentless, not to mention it was pretty steep uphill. My cousin and sister were a bit more energetic and ran strongly uphill while I ran slightly slower. The two kilometers from the bridge to the finishline I was pretty tired but kept up with the pacer and finished third in the family and on a time of 1.44.24. I was pretty happy with running sub 1.45 despite feeling tired and with my poor preparations for the race but I still left Östersund feeling very disappointed with myself and my race - why I do not know, it was just the feeling I had.

All in all it was a great race, it was just unlucky that the weater was so rubbish. It was a beautiful run and I thoroughly recommend it - just do a bit more trainig for it than I did if you want to run a decent time ;) 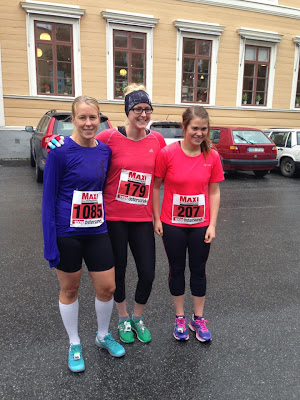 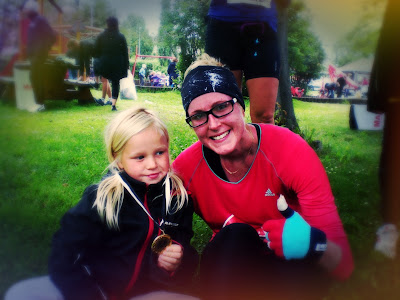